“What time is it?” I ask my 7 year old niece. In response, she immediately picks up her iPad, and says, “3:15 pm.” I smile, because I know what’s coming next. “Want to play a game with me?” she asks excitedly, knowing that yes, of course I do!

She unlocks the iPad, scrolls through all the apps she has downloaded and settles on Kids Tell Time, which was developed by ZurApps Research Inc. She opens the app and decides she wants to play the “Match the Clocks” mode (there are 6 different modes to choose from Kids Tell Time). I sit there watching in amazement, because she does this all so easily. Oh, how times have changed!

She starts the “Match the Clocks” mode and is immediately prompted by a friendly voice to match the digital clock with the analog clock that shows the same time. She’s so excited – it’s contagious! She ponders for a moment, looking at the multiple clocks. I tell her to read aloud the times on the digital clocks, and once she does that she refocuses on the analog clock faces. I can see the wheels turning! She drags the dialog clock that reads 4:45 over to the matching analog clock, “You got it! The time is 4:45.” says the app. All I see is my niece is smiling.  She’s so proud of herself and the positive reinforcement from the app is encouragement enough to try another. This time it doesn’t go as smoothly, “This is not the answer”, says the app. She pauses, re-evaluates her options and tries again. This time it ends with her smiling even more. “This is the correct answer!” says the voice of Kids Tell Time.

When my other niece comes into the room, she immediately wants to join in the fun, obviously! They took turns and even watching someone else play was fun! We were all playing and learning together! 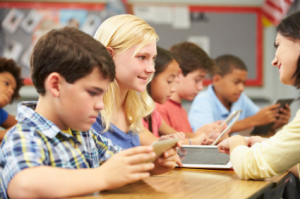 It is evident that using technology in an educational sense is becoming increasingly popular. TV shows are educational, almost all classes have computers now and many families have a tablet or smart phone at home. Kids have adapted to learning with these new methods, and are often more comfortable to do so than with traditional methods.

Apps made for children, like Kids Tell Time, have grown in popularity substantially over the past few years. In early October, UK telecoms regulator Ofcom released their latest study, Children and Parents: Media Use and Attitudes, and it has masses of data on how British children are getting their entertainment across different devices.

That is a lot of children who are using tablets. So, instead of your kids just using the tablet for pleasure and distraction, why not incorporate some education in the mix? Apps like Kids Tell Time are educational and fun. Not only will your child learn to tell time on both analog and digital faces but the positive reinforcement and rewards system within the app will encourage kids to keep trying and challenge themselves. They’ll want to continue earning those stars! Kids Tell Time is also available in three different languages (English, French and Spanish), so your kids can use their iPad to learn a new language. This option would also be great for teachers because the apps language can be adjusted, meeting all students needs, and all students can participate and use the educational app in the classroom due to the apps ability to connect the iPad to a television.

Interactive elements and step-by-step narrated instructions make apps like Kids Tell Time easy for kids to use without parent supervision. Another great feature for educational children apps is the new guidelines Apple has set for “Made for Kids” apps. With no in-app purchases, no data collection, no third-party advertising or links to other apps, parents can feel safe letting their kids use Kids Tell Time without having to worry about unexpected charges showing up in their iTunes account! No one likes those! Give your children a way to learn, and enjoy it at the same time!

Technology in education is the way of the future.
Stay current and encourage fun, educational activities with apps like Kids Tell Time!

A summer getaway will help keep the kids busy and your family can create some great memories! Taking the family on a road trip, even if it is only an hour or two away, can be a great bonding experience. You pack the car, get everyone situated and off you go; out on the open road! But, after a little while, the excitement will wear off and the restlessness will set in. The questions will start; “Are we there yet?”; “Billy is pinching me!”; “Susie won’t stop kicking!”, and of course the inevitable, “Keep it up and we will turn this car around and just go home!”

Why not avoid all of that stress, and plan some fun and easy road trip activities for kids?  Playing games like “I Spy” might prove to be a little bit difficult if outside is dark and gloomy! Luckily, ZurApps has a solution to that! Our FIND + LEARN app is perfect for road trips. FIND + LEARN is an educational, interactive app. With different modes and collections, FIND + LEARN will keep your child entertained in the car for hours! The Find It! Mode will ask you to find a specific image, on a page of multiple images. Basically, FIND + LEARN is a modern day, technology based, “I Spy!”

So, pack up the car, download FIND + LEARN and don’t forget your charger!

I spy, with my little eyes something that is….FUN!